Forest to Table: Deer hunt delves into the ethics of eating 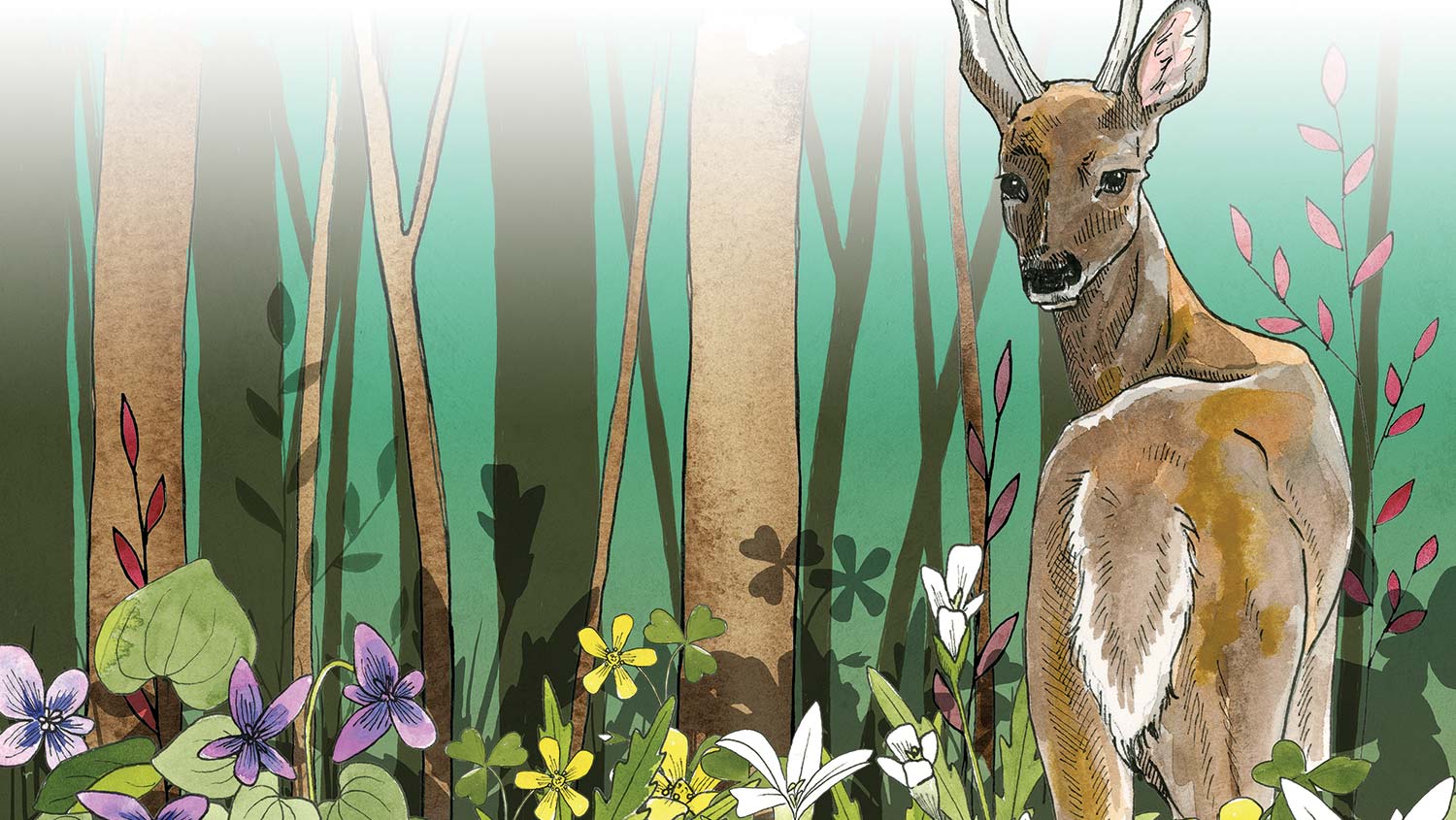 The moon was centered in the afternoon sky as Emily Hayne and I walked quietly—carefully—along the edge of the tall grass prairie toward the red maple swamp. As we moved downhill, we paused to pay attention to a line of fresh deer tracks in melting snow before making our way to the stand.

Emily, a student in Goshen College’s Masters of Arts in Environmental Education program, has for many years followed a vegan diet to contribute to personal and ecological health. But when Emily came to my family’s home for dinner a month earlier, she enjoyed seared tenderloin from a deer I had bow hunted.

As unusual as this might seem—a venison-eating vegan—it was more the continuation of a pattern than a one-time occurrence. Other vegetarian and vegan friends have done the same, and have also shared interest in learning how to hunt.

For Emily, going hunting was a way to engage with the whole process of bringing food to the table, including the spectrum of emotional, spiritual and physical responses to that experience. From her perspective, wild animals have a different ethical imperative than domesticated livestock. Deer live freely and have an ecological role that exists within the landscape, not just for human interests. And Emily was exploring the possibility of bringing her diet a bit closer to home.

In our global food system, where major amounts of energy and habitat are spent in the production, transportation, processing and packaging of our food, we don’t necessarily see the impact and grasp what it all means. But we can experience what it means to bring deer home for dinner.

As we climbed the ladder into the gray stand, a pileated woodpecker cackled loudly. We sat down and settled in. Soon, the deer started to move.

Emily pointed toward a young buck that was approaching quietly in the dark wetland soil. This small-bodied deer would be flavorful and tender in comparison to older deer, and his survival would be less vital to the overall health of the herd than the older, more experienced does and bucks.

“I’ll take the shot if I’m given one,” I whispered so Emily could prepare. Suddenly, the buck stopped. He had picked up our scent on the wind. He turned around to walk back into the cover, but paused in an opening between two maples, allowing me to take one good shot.

We waited most of an hour before climbing down to track the deer. In the snow where he had stood, we found droplets of blood radiating red. At the end of the short trail, I knelt down next to the deer, placed my hand on his warm side, and said thanks.

I showed Emily how to remove the deer’s organs, first slicing into the skin and then into the body cavity and through the cartilage where the ribs connect to the sternum.

“How are you doing with this?” I asked.

“Would you be willing to hold open the ribcage?”

Emily hooked her fingers inside the ribs while I cut the diaphragm, the thin sheet of muscle that holds the organs in. I am used to the scent. What I never get used to is the striking form of the heart, liver and lungs—and the thought that ours are similarly ornate.

With blood drying on our hands, we gripped the deer’s legs and carried him toward home. 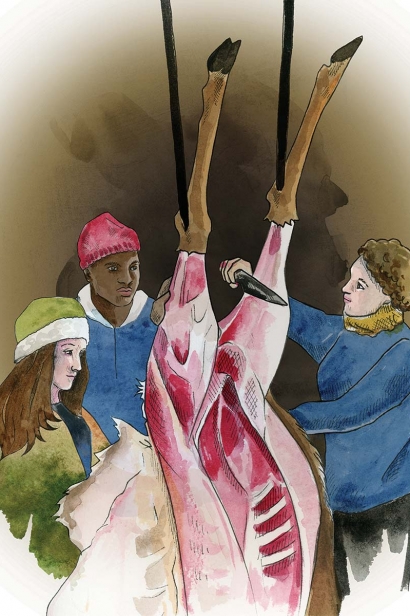 A process of gratitude

A few days later, with the deer hanging by his back legs from the rough-sawn rafters of the cider shed at Goshen College’s Merry Lea Environmental Learning Center, we shared the story as we removed his skin with several other students who had joined in the process. In three hours, we had all of the muscle removed from the bones, trimmed and sorted for freezing.

Although the ethics around eating meat can be polarized, experiencing how our food comes to us—and the processes and relationships around it—can help us understand our places, others and ourselves. When we seek out the edges of our own values, and remain open to those of others, our food can nourish in many ways.

The next night, we had dinner together to honor the deer. I seared some tenderloin and made a roast. Knowing part of this deer’s story, we took small bites and knew what we were grateful for.

Subscribe now to get exclusive Food Notes in your email inbox every month.

Subscribe now to get exclusive Food Notes in your email inbox every month.

Not every 7-year-old girl tries to tan hides in her bedroom. Melissa Klingerman, who grew up in a family of hunters, did—until her mother discovered the rabbit skin under her bed. It was Melissa’s las...

Hank Shaw’s Hunt, Gather, Cook provides inspiration for all of us to remember and sample the rich abundance of the world around us. He encourages us to begin simply with what grows in our own backyard...

Every year in September, I lead students from Goshen College’s Sustainability Leadership Semester on an eight-day canoe trip from the headwaters of the Elkhart River at Merry Lea Environmental Learnin...

From the Good Earth: Foraging 101

Raised in Southern Indiana with family members who gardened, tended fruit and nut trees and harvested all sorts of things, including rose hips and dandelions for wine and morels for Sunday breakfast, ...

Get Food Notes in your email inbox every month!

Sign up for scrumptious food stories, recipes, photos and more.